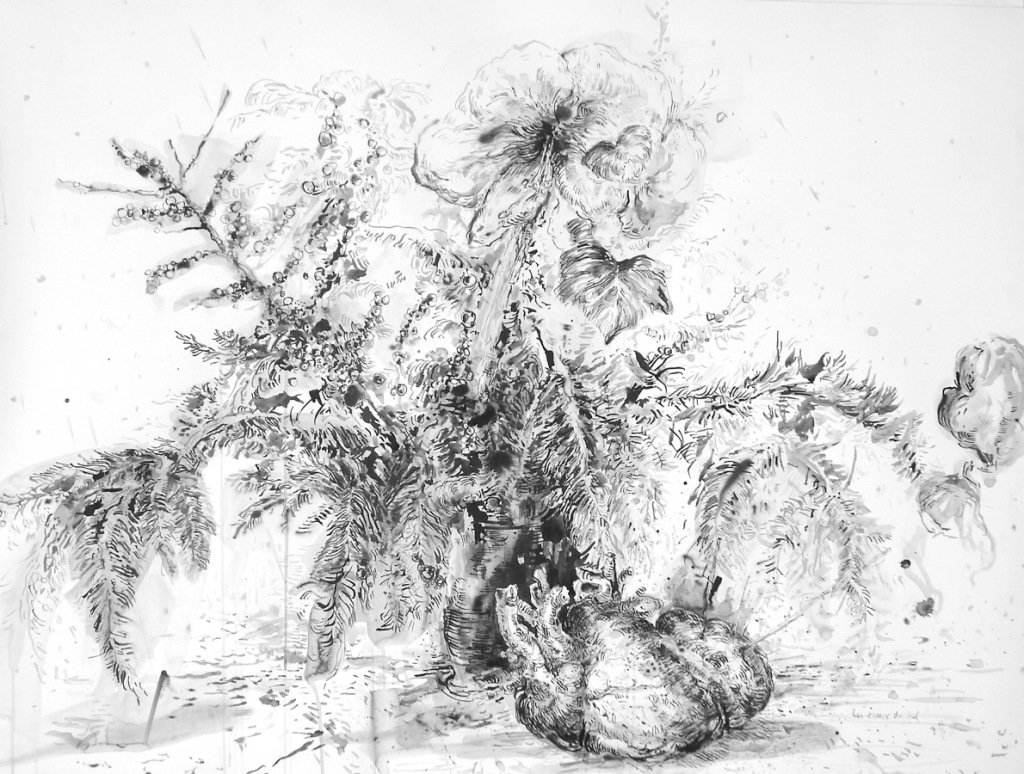 The King of Inner Devils

“My heart is lost; the beasts have eaten it.”
— Charles Baudelaire, Conversation, Les Fleurs du Mal

Like Charles Baudelaire in his controversial 1857 volume of poetry Les Fleurs du Mal (The Flowers of Evil), Ulrike Theusner and Paul Brainard explore the dark meanders of the human mind, the immoral side of urban life and the gross lack of empathy that continues to mar western culture. The depictions of sexual perversion, corruption, and mental and physical illness, so prevalent in Baudelaire’s poems, find their contemporary reflection in the drawings by Theusner and Brainard, who wade through the popular cultural imagery of what on the one hand is our subjective personal experience and on the other – the universal human condition. The exhibition features 25 drawings, three of which are collaborative works, built on ideas explored through Theusner and Brainard’s conversations about the condition of today’s urban culture.

The ink drawings of Ulrike Theusner are based on William Hogarth’s famous etchings “A Rake’s Progress” and the photographs of Jerome Zerbe’s Book “Happy Times.” The drawings describe the decline of a rich heir over the course of eight chapters. The protagonist is a lethargic puppet, the heir to a rich merchant, who over the course of the story wastes all his money on gambling and prostitution, eventually resulting in his being sent to prison and later to a home for the mentally ill. It is not a moral commentary as originally intended by Hogarth, but a metaphorical description of today’s society. This lifestyle offers no satisfaction for the protagonist and he finally ends up in a psychiatric hospital, surrounded by histrionic monkey figurines in baroque costumes: humans behave like monkeys and monkeys behave like humans.

Paul Brainard’s works in Les Fleurs du Mal are made up of portraits of friends, family and people from his life, imagery from advertising, the internet, and American puritanical religious imagery. A common thread throughout the work is a dark and macabre sensibility that stems from existentialist and absurdist philosophy. Formally, the drawings are in a constant state of flux and the final image arrived at is one of many possible solutions.

The largest work in the show I sleep under a sky of extinguished stars, was inspired by Robert Kolker’s book “Lost Girls,” the story of the lives of the prostitutes who were all murdered by the “Long Island Serial Killer” and whose bodies were discovered in December 2010. This artwork is a posthumous portrait of Jessica Taylor, a prostitute who was murdered and whose remains were discovered in the spring of 2011. The case remains unsolved.

The Lodge Gallery, founded by Keith Schweitzer and Jason Patrick Voegele, is located at 131 Chrystie Street on Manhattan’s Lower East Side. It is the exhibition venue of Republic Worldwide and serves as both an art space and a gathering place for hearty discourse and experimentation.